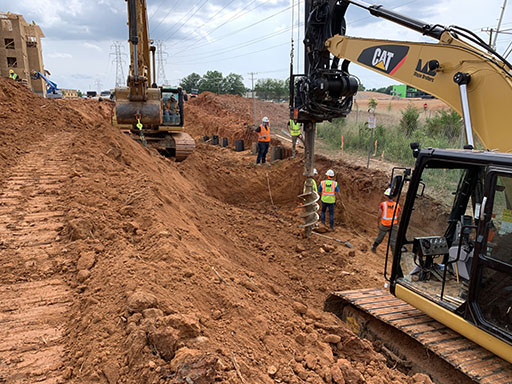 The temporary earth retention system selected was a soldier pile & lagging wall. The purpose of this earth retention system was to permit safe foundation excavations adjacent to existing structures and access roadways around the project site. The need for these services was recognized while foundation excavations were beginning on site. We responded to our clients needs by providing design submittals and arriving on site within one week. Approximately 250 linear feet of wall was installed on this project.

The project had a smaller site footprint than most jobs that the Civil & Infrastructure group has completed. It included existing buildings on 3 sides and within close proximity. With the site being on the smaller side, one of the challenges we faced was having less room to maneuver as the site continued to be developed. Planning was critical to avoid any potentially costly mistakes once access became limited. This was an export site, so a lot of the dirt was hauled off in order to balance the site. A key feature of the storm drain system was the underground detention system which required very precise survey layout and a crane to set it in place.