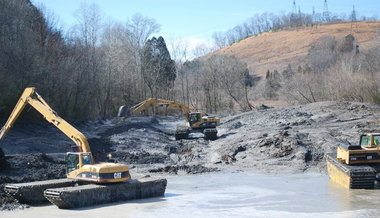 BIRMINGHAM, Alabama — Researchers at Auburn University and the University of Alabama have teamed up to devise a new recipe for a concrete, one that has the potential to reuse a form of toxic waste, cut greenhouse gas production and introduce new technology to the world’s most common building material.

Jialai Wang at Alabama and Xinyu Zhang at Auburn are perfecting a process that takes a power plant by-product — coal ash — and uses it in place of cement in their recipe for concrete.

Their recipe also includes a futuristic ingredient, carbon nanotubes, and a new technique for making them. The nanotubes, which add strength, durability and conducting properties to the concrete, are produced by cooking an iron compound for 10 seconds in a microwave. The researchers have dubbed the result “Poptubes.” “It is very much like you cook the popcorn,” Wang said.

Concrete accounts for 70 percent of all construction materials globally. It has advantages such as easy application, but to make concrete you need cement. Cooking cement requires a lot of energy and results in the production of a large quantity of greenhouse gases.

Coal ash already sometimes is used as an additive in concrete, but most of the massive amount of coal ash generated nationwide is stored in landfills or ponds, where there is the potential for the trace toxic contaminants to leach into groundwater or wash into the environment, in the case of a catastrophic dam failure.

The Environmental Protection Agency is studying various ways that coal ash is reused to make sure the traces of heavy metal in it are bound up in the new applications and don’t leach out. Meanwhile, Wang, Zhang and fellow collaborators have received a $450,000 grant from the National Science Foundation to further the development of the concrete alternative. Their method of producing nanotubes also has drawn attention in scientific journals such as Nature. Current methods of producing nanotubes involve high temperatures and special sealed chambers filled with inert gas.

A start-up company based on the technology, Carbon Nanotube Engineered Surfaces LLC, has been formed and is hoping to win funding through the Alabama Launchpad contest, a competition for start-ups seeking seed money.

Black Warrior Riverkeeper Nelson Brooke said he wants any plans to reuse coal ash carefully studied before being widely applied. A safe, proven method of recycling would be preferable to storing coal ash in ponds and landfills, Brooke said. But he said that would not, in his opinion, make up for coal’s environmental toll. “I certainly see red flags when coal ash is referred to as environmentally friendly or eco-friendly,” Brooke said.

Nanotubes also have provoked concern in some quarters, because with their tiny size they can pass through barriers of living cells, potentially causing inflammation or disease.